Indonesia’s 2014 election finally came to a close last Friday, as Indonesia’s Constitutional Court rejected the Prabowo-Hatta team’s challenge of the July 9 elections (see Ray Yen at New Mandala for some pictures). This is not an unexpected ruling: we have known for some time that Jokowi-JK won the popular vote by a substantial margin.

We know this, of course, because of crowd-sourced election monitoring by KawalPemilu.org and other outfits that digitized the tens of thousands of ballot forms that had been scanned by Indonesia’s Electoral Commission (KPU) and placed online. A lot of credit is due to KPU itself for taking the affirmative step to put all of these forms online in the first place. But given the slow pace of KPU in actually releasing the final tallies, KawalPemilu.org gets major kudos for releasing everything, and quickly.

Let’s take a look at how KPU did. Since July 17, every other day or so I’ve been scraping the village/ward-level vote tallies from the KPU website using a nifty little Python script put together with Seth Soderborg. KPU has 81,000 villages/wards to cover, so it’s not surprising if not everything is ready at once. But a substantial proportion of these results remain missing, over a month after “official” decision by KPU on July 22 and even today, a month later! The slopegraph below illustrates the problem of missing vote returns, over time and by province. The vertical dashed lines are for July 9 (election day), July 22 (the date that the official result was released), and August 22 (the final verdict by the Constitutional Court). 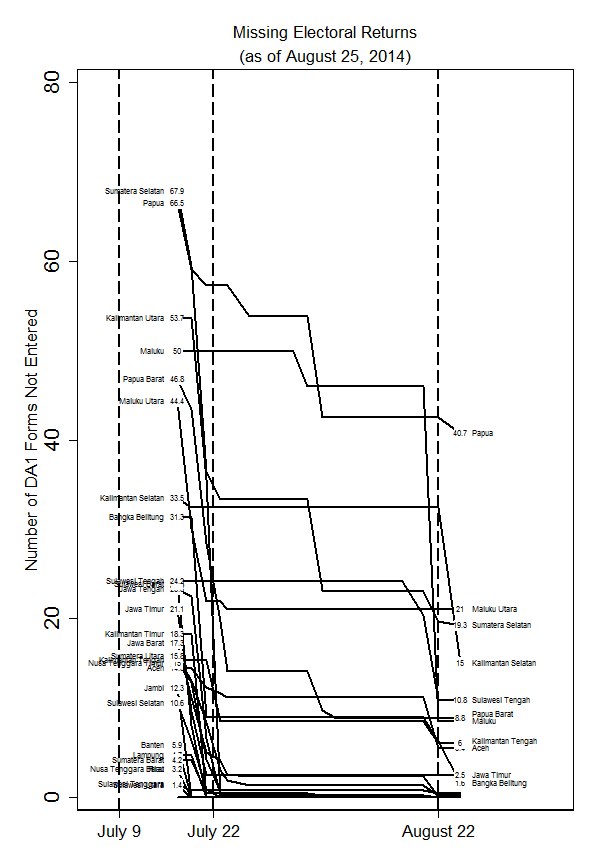 You can see clearly that even today, KPU has yet to release substantial amounts of data on the final vote returns from provinces like Papua, North Maluku, and South Sumatra. And clearly, they were holding back even more data until the August 22 decision: the data points for on August 22 are what I scraped during the North American daytime hours that day, meaning that they were uploaded to the KPU website only hours earlier, right after the Constitutional Court’s decision, Indonesia time.

Again, KPU gets major credit for putting the scanned forms online. But it was KawalPemilu.org, and everyone who helped count the votes, that confirmed that Jokowi-JK won before anyone else could.

Kevin Fogg points out in a comment that the above figure might be misleading in its focus on the percentage of missing villages/wards. It’s also useful to see the total number by province. Here is what that looks like. 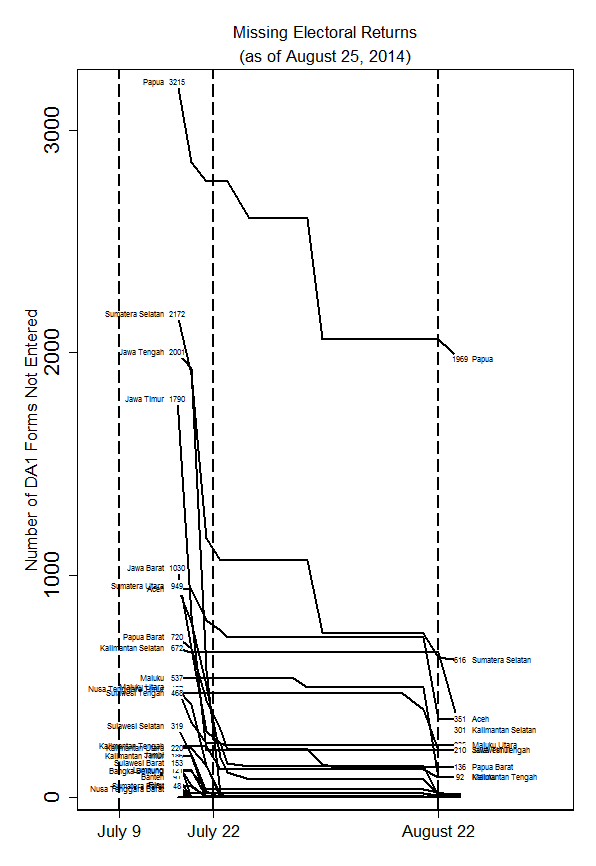 What we really want to know, though, is the percentage of Indonesian voters whose votes have yet to be counted. Alas, we can’t count that, not without a separate estimate of the population of each village or ward.