It’s almost time for the annual meeting of the American Political Science Association, which means it’s time for new APSA papers. Jeremy Menchik and I have recently completed ours, entitled “Islam, Identity, and the Organizational Roots of Political Tolerance.” You can click that link for the SSRN version; below is the abstract.

The growing literature on tolerance has struggled to understand its social foundations. In this paper we argue theoretically, and show empirically, that religious organizations play a central role in shaping tolerance towards religious minorities. Drawing on a rich survey of 1000 elites from three large Muslim organizations in Indonesia, we demonstrate that Muslims elites’ willingness to tolerate Christians depends on the social situation, and we identify distinct patterns of tolerance in the domains of politics, the public sphere, residential segregation, demonstration, education, and religion. We then demonstrate that organizational membership, in and of itself, does not explain attitudes of political tolerance; instead, organizational identification does. Among those elites whose organizational ties are weak relative to their identification with their faith or with Indonesia, organizational membership does not explain tolerance. Our argument provides structure to the complex interactions among organizations, identities, and tolerance in the Muslim world.

It is interesting to see how Indonesia’s mass Muslim organizations do and do not differ. Here is one particularly illustrative figure: 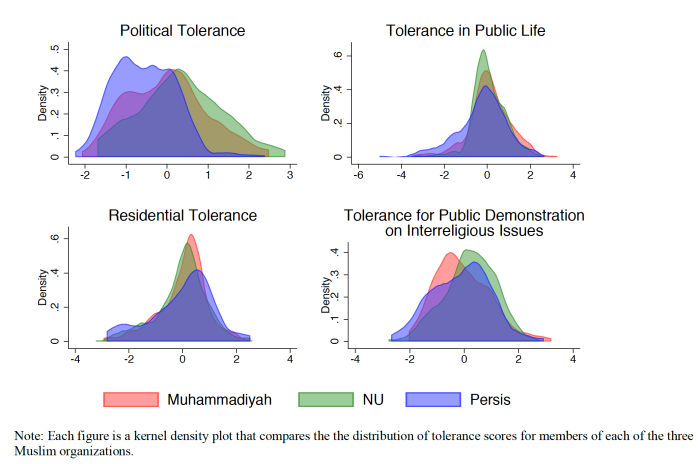 There is lots more in the paper to chew on. It will also prove interesting—well, perhaps to a subset of readers—to mull over our massive number of interaction tests in light of this recent post on interactive hypotheses by Andrew Gelman. Our is an argument that depends on interactions among identity and organizational membership, and we learn as much from the “non-findings” as from the findings.