Scholars of modern Indonesia like to periodize the country’s political history according to its macropolitical environment. The established periodization looks something like this, with some disagreements about just when the Liberal and Guided Democracy periods began and ended.

Historians will divide up the Dutch colonial period into the VOC, the middle, and then the Ethical Policy, and everyone recognizes that this kind of periodization is very Java-centric. The topic of today’s post, though, is how to think about what has come next.

One common term for post-New Order Indonesia is the “Reformasi Era.” 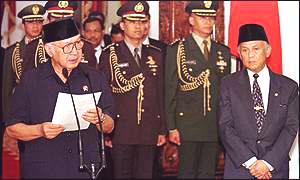 Reformasi (reform) was the single most captivating expression of anti-Soeharto sentiment starting in 1998, and it became a rallying theme for reformers after Soeharto resigned—so much so that his successor, B.J. Habibie, appropriated it in the name of his cabinet.

But it’s been 14 years since Soeharto’s resignation. It is certainly possible to think of this as all the Reformasi Era (as wikipedia does) but that seems, to me, to be inconsistent with the spirit of Reformasi as a reaction against the New Order in particular. No one can ignore the New Order’s influence on politics today, but my instinct is to say that this isn’t Reformasi anymore. This is a new normal.

One the first question, one could mark the end of the Reformasi Era at various points. The first competitive legislative elections in 1999. The ouster of Gus Dur in 2001. The election of SBY in 2004. These are developments that focus on national politics at the highest level. But I would argue that the most important changes have not been competitive legislative elections (since 1999) or direct presidential elections (since 2004), but rather the devolution of power to the regions through decentralization and regional autonomy, implemented beginning in 2001. Starting then, Indonesian politics ceased to be “about” Reformasi (despite the continued ubiquity of the term in political speech) and started being “about” the division of political authority in the center versus the regions, in contrast to the steep hierarchy with Jakarta at the top and the regions at the bottom.

So by that standard, the Reformasi Era ended in 2001. OK then, so what do we call this era? We already know its defining features: multiparty democracy plus regional autonomy. I’d like to think of a snappy two-word term, one that has a nice Indonesian translation, but (like titles) snappy two-word terms are not my specialty. Divided Democracy? Not really accurate. Decentralized Democracy? Accurate but bland. Contested Democracy? Multiparty Democracy? Don’t really get at the issue of decentralization. I want something like Polycentric Democracy to connote the proliferation of political parties and loci of power at various levels, but “polycentric” is terrible.

After a couple of days thought, I think I have a winner: Segmented Democracy. For Indonesians, we might best translate this Demokrasi Terpisah (although that’s not great, pisah is closer to “to separate” than “to divide into segments”). Neither are perfect. If you have a better idea, let me know.