Late last week I tweeted a summary evaluation of the state of democracy in Southeast Asia:

Any evidence of democratic backsliding in Southeast Asia in the past decade? With the benefit of a bit of historical perspective, not really pic.twitter.com/ukk5b9W3Jc

One possibility is that I have just chosen lousy data. That said, the data I used to construct those figures come from Freedom House as well, so it would be a bit surprising to use that organization’s description of its own data to criticize… what those data say.

But perhaps different metrics would paint a different picture. To check, I recreated these graphs using three different indicators of democracy: Polity IV scores, the V-Dem Electoral Democracy (or polyarchy) score, and the V-Dem Liberal Democracy score. The difference between electoral democracy and liberal democracy, according to V-Dem (PDF), is

The electoral principle of democracy seeks embody the core value of making rulers responsive to citizens, achieved through electoral competition for the electorate’s approval under circumstances when suffrage is extensive; political and civil society organizations can operate freely; elections are clean and not marred by fraud or systematic irregularities; and elections affect the composition of the chief executive of the country

The liberal principle of democracy emphasizes the importance of protecting individual and minority rights against the tyranny of the state and the tyranny of the majority. The liberal model takes a “negative” view of political power insofar as it judges the quality of democracy by the limits placed on government. This is achieved by constitutionally protected civil liberties, strong rule of law, an independent judiciary, and effective checks and balances that, together, limit the exercise of executive power.

Here is what these data show: 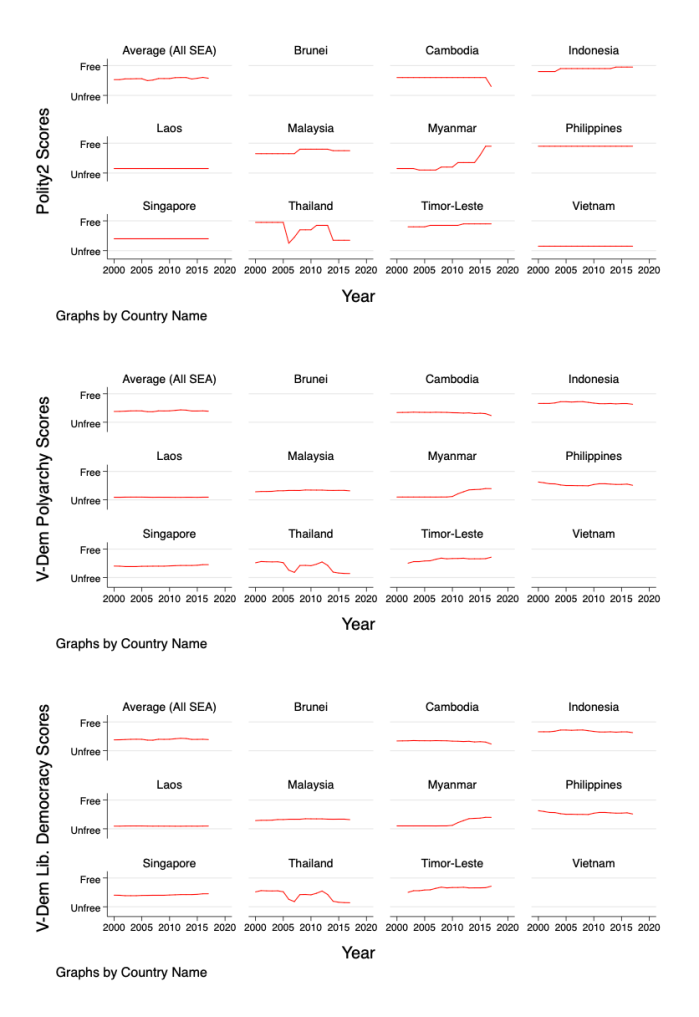 The main differences are that in all three of these alternative indices, Cambodia’s rating declines over the past couple of years. There is also a very small downturn in both Indonesia and the Philippines in the V-Dem ratings, but it is small enough that it is hard to see.

Given the many concerns about the state of democracy in the world today, these new graphs suggest that we ought to focus attention on those indicators that demonstrate that this decline exists. Given what I know about Indonesia in particular, my intuition and my instincts both tell me that we ought to prefer the V-Dem indicators to the others. But I am willing to mount a provisional defense of the Freedom House scores that do not show evidence of democratic erosion, against the more “nuanced” V-Dem indicators that confirm my worries. The basis of this defense is this: we might prefer a specialized and standardized coding instead of crowdsourced evaluations by experts to capture recent changes.

Here is what I mean. Focus on Indonesia: Indonesia slipped from the rank of “free” to “partially free” in Freedom House back in 2014:

Indonesia’s civil liberties rating declined from 3 to 4 and its status declined from Free to Partly Free due to the adoption of a law that restricts the activities of nongovernmental organizations, increases bureaucratic oversight of such groups, and requires them to support the national ideology of Pancasila—including its explicitly monotheist component.

This happened at the same time that Indonesia withstood a strong challenge from anti-democratic populist challenger Prabowo Subianto. If you stood back from these two facts about Indonesian politics, you might infer that the important news is democratic strength. Marcus Mietzner (PDF) aptly describes what happened in 2014 as “democracy survived.” This is not an exaggeration. But Freedom House picked up on an important development in Indonesian democracy as well, the state’s ability to regulate political competition. And that was serious enough to change its evaluation of Indonesia’s political freedoms and civil liberties, even if those tools were not immediately used for obviously anti-democratic purposes.

Now fast forward a couple of years: Mietzner and Ed Aspinall note that by the middle of his first term,

Jokowi’s government increasingly began to use law-enforcement agencies against its opponents. For instance, the police threatened the firebrand head of FPI, Habib Rizieq Shihab, with pornography charges in mid-2017, driving him into self-imposed exile in Saudi Arabia. A range of leading government critics that included both Islamists and Prabowo supporters found themselves threatened with makar (rebellion) charges. Others were charged with criminal defamation or spreading hatred or hoaxes online. In 2018 the police cracked down on supporters of a “Change the President” movement that sought to organize anti-Jokowi street rallies. Such measures were accompanied by an ever more energetic ideological campaign reasserting the primacy of Pancasila and vowing stern action against those trying to challenge it.

These steps by the government reflect its willingness to use the policy and regulatory tools that had been available to the government but perhaps not noticeable because they had not been employed so directly. But—again—if you step back and focus on what seems like the real news, it is now “democracy under threat.”

If you believe that a mass of crowd-sourced ratings by experts is more likely to focus on newsworthy political developments that make it to the headlines, then you can imagine that they would focus on those, rather than on the more abstract and less sensational legal changes that empower governments to take those actions in the first place.

Pulling this discussion together, the question to ask when choosing between the indicators is whether or not threats to democracy are only “real” when they are enacted, or if they are “real” just as soon as they become possible. I see the latter as the more fundamental commentary on the state of democracy in any particular country. Viewed that way, democracy in Southeast Asia’s electoral democracies has been in trouble much longer than just the past couple of years, the country experts have been saying so.