In my post on Unit Homogeneity in Subnational Comparative Research, I highlighted how Papua in Indonesia is just very different than the rest of Indonesia. My point in raising this is to suggest that the problems that Papua poses are general challenges for subnational comparative research projects all of the world. But Southeast Asia is my laboratory for the rest of the world, so that is where I plan to explore these problems in the greatest detail.

That has led me to create this map (using GADM, maptools, and rgeos) of subnational peripheries in Southeast Asia. 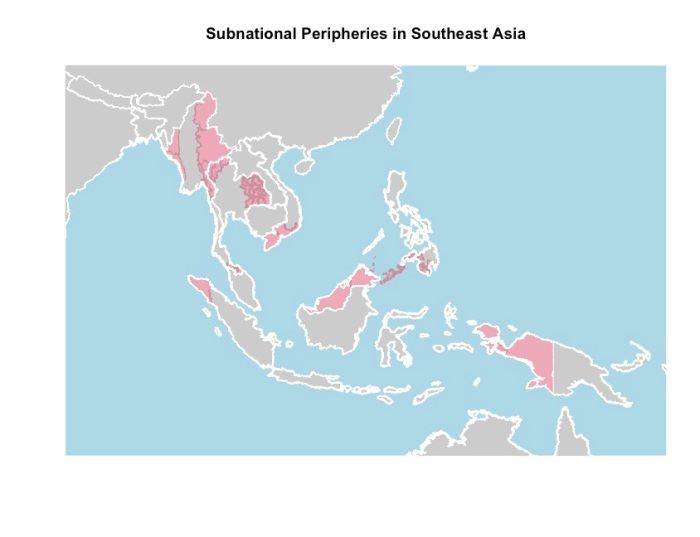 The pink areas are subnational peripheries: the ethnic states in Burma; Pattani, North, and Northeast Thailand; a rough approximation of the French territory of Cochin Chine in Vietnam; Sabah and Sarawak in Malaysia; Aceh and West Papua in Indonesia; and the Autonomous Region of Muslim Mindanao plus some contested adjacent territory in Mindanao and Zamboanga in the Philippines. I could have gone further—the border region between Thailand and Cambodia, or North Sulawesi, or Kelantan, or the western bits of Timor Leste—but these are the most illustrative examples.

Subnational peripheries as I’ve shown them are regionally defined, located at the tips and ends and border regions of modern states. This makes them different from other alternative geographies in Southeast Asia such as Zomia. But this conceptualization of peripheralness shares with Zomia the old Southeast Asianist’s obsession with problematizing the nation-state and its borders.

Some readers may be familiar with the old joke that if you’re ever at a party with an obnoxious jerk who talks about some country where you’ve never been, you can always have something intelligent to say with “yeah, but of course it’s so different in the south.” (Think about it: works for Italy, Germany, France, Mexico, Argentina, USA, China, Japan, Russia, Egypt, Nigeria, and on and on). In Southeast Asia, the same is true; but for the skinny island countries of Indonesia and Malaysia that don’t really have a south, “it’s so different in the east” will work too.