This post is a reflection on governance as a concept.

Much of my current research focuses on how governments operate (see e.g. here and here). By this, I mean something other than how governments are chosen or structured, and instead, how and why they relate to their citizens and make policy.* I have been slow to come around to this perspective, but what I am studying here is something called governance. Why have I been slow to come around to it? Because governance has to be the squishiest concept in all of the social sciences. Here is an actual conceptual definition of governance taken from the World Bank:

governance…can be defined as the rule of the rulers, typically within a given set of rules.

I am not making this up. My point is not that there is no conceptual or empirical research on governance…the exact opposite is true (see e.g. Jomo and Chowdhury [H/T @governwell]). The point is that we seem no further along in the governance debate than we were fifteen years ago, despite broad agreement that governance matters.

I hope to make some theoretical and conceptual interventions into this literature. In doing so, I want to start from first principles: is governance a thing at all? I believe so, but to make such a claim, we must show that governance can be defined, conceptualized, and measured in non-trivial and non-tautologous ways.

Kurtz and Schrank have a nice critique of the use of governance indicators to explain economic outcomes, and part of that critique is that our measures of “good governance”—often based on individuals’ perceptions of governments, rather than objective conditions or government practices—may simply reflect the outcomes that governance is meant to predict. This would explain, for example, why corruption perceptions after the Asian Financial Crisis worsened in countries that suffered from the crisis. 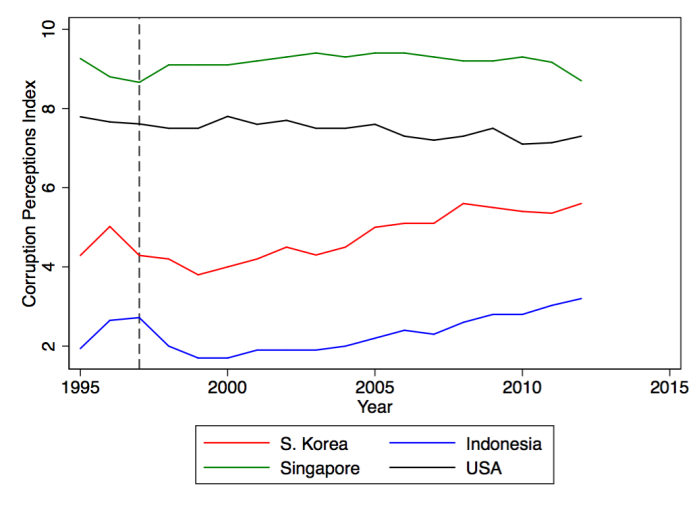 It is almost certainly not the case that Indonesia and Korea actually became more corrupt after 1997. More likely, the people responding to the surveys that create the indicators are more aware of corruption after its consequences were uncovered for all to see.

Thinking this way immediately raises an interesting possibility: perhaps in practice, as an empirical matter, governance varies along multiple dimensions. I have found this a fruitful avenue of thinking: In this paper on governance in Java, I am very careful to specify that I am capturing variation in governance that should not be understood as good-vs.-bad. In fact, it is that realization that has prompted me to step back, to wonder if governance is a thing at all.

Watch this space for more.


NOTES
* In fact, this is a central theme across my entire research portfolio, that the determinants of policy outcomes and political choices lie beyond the scope of exclusively institutionalist analyses.

** This is particularly important in reference to two of the most coherent definitions of good governance of which I am aware, Kaufmann et al.‘s “the norms of limited government that protect private property from predation by the state” and the Rothstein and Teorell (PDF) definition of quality of government as “impartiality in the exercise of public authority.” I like the clarity and coherence of these definitions—and recognize, too, that they are contested. But they both (1) leave underspecified what good governance is a form of, and (2) what governance is: it is a norm, a practice, or something else?