Every Indonesia hand knows about rendang, a spicy mutton or beef curry. What makes rendang so special is that it is prepared by boiling meat in coconut milk until the water of the coconut milk evaporates. When that happens, the coconut oil separates from the solids, and is used for frying the meat. Long-time readers will remember when we first made this dish in Jakarta in 2004. 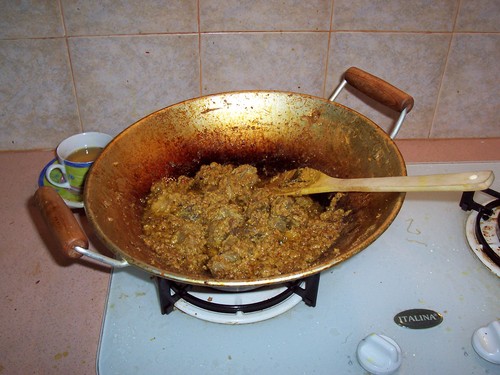 But maybe it’s not so special. It turns out that every good Jamaican knows about run dung (occasionally rundung or run-dung), also known as Dip and Fall Back, because

When yuh boil down di coconut milk with seasoning to di point it turn custard and yuh add the salt fish – shad, cod or mackerel yuh haffi dip and fall back.

This description seems to be exactly the same as making rendang. And run dung isn’t always made with fish. Check out this image of chicken run dung:

The question to ask is how it got that way. Does rendang ≈ run dung? A brief web search cannot uncover an etymology for either term, but this is too close to be an accident.

If the terms are related, it’s fun to speculate about the possible etymological links. Three paths seem possible to me.

If I were a PhD student in anthropology, I would work on topics like this.