The craft brewing craze has arrived in Indonesia. Seriously. I was strolling around one of Jakarta's swanky malls this weekend, pricing bespoke suits (everything's out of my price range), and happened across a fancy grocery store. I always have fun looking at grocery stores in other countries, and so I took a stroll through it. And while there, I noticed a display selling five kinds of specialty beers brewed by a firm called Storm Beer, based out of Bali. So of course I had to get a couple to sample.

Having lived for some time in the Napa Valley of beer, I have pretty high expectations of craft breweries. (I also have a limited tolerance for annoying craft brewing techiques, like brewers that attempt to outdo one another making the "hoppiest" or "strongest" or "darkest" beer in search not of good taste but rather of superlatives. But I digress.) So here are my reviews of three of Storm Beer's selections. I decided to skip two of them (Bronze Ale and Pale Ale) because I tend not to like those styles very much, especially pale ales. The remaining three are the ones that looked most appealing. 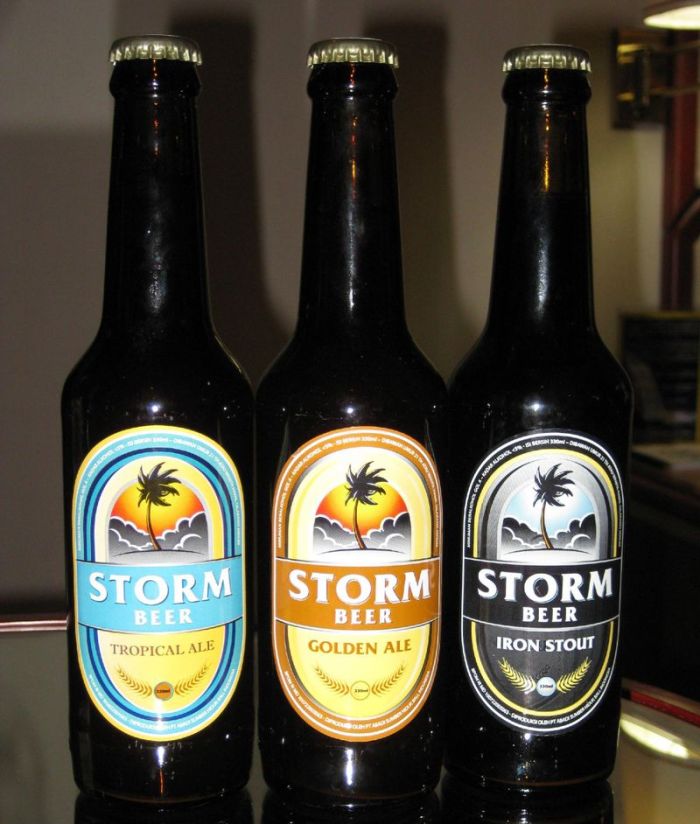 Before we get started, let me admit that I have no idea about how to taste and or rate beer. None. So this is just me aping the way that I've seen other beers rated.

Storm Beer Golden Ale
Pours a large head, but is highly carbonated so it evaporates quickly. Cloudy with a golden color. The nose hints of wheat and hops. The initial taste is wheat and yeast, followed by unidentifiable sweetness (not like a honey or sugar sweet, but I can't describe it properly). Dry bitter finish and aftertaste. Overall: for a summer beer there is probably too much flavor here, but it is pretty good and I prefer this to the standard local swill.

Storm Beer Iron Sout
Pours a nice head, also fairly carbonated. Brown/black in color. The nose smells roasty. Taste is surprisingly bitter and thin, less big and chocolatey or malty or roasty as I would prefer in a stout. Bitterness continues though the finish and aftertaste. Again, the word that comes to my mind is "thin." Overall: this is unremarkable as far as stouts go, but it's not a bad beer in general.

Storm Beer Tropical Ale
Another big foamy head, highly carbonated but less than the Golden Ale. Lemony yellow in color, not cloudy but still opaque. A distinctly skunky nose, reminiscent of the lower rungs of the Milwaukee ladder/my sock drawer, but combine that with a whiff of lemon. Confusing taste: starts with lemon, then moves to grassy and herbal flavors. Also a bready/yeasty note which does not combine well with the others. Finishes with more lemon and some light hops. Citrus taste lingers for a bit, and is not unpleasant, but the last bit of the aftertaste is of Icehouse. Whoops. Overall: sock drawer + Icehouse: this is a disappointment. Maybe a slice of real lemon might help. Would not drink again.