Nomination Day was April 20: we now know the full list of candidates for all 222 parliamentary races and 505 state assembly races. Election Day is less than two weeks away now. Some very interesting analysis of the Nomination Day results is available at Malaysia’s Dilemma, especially this recent piece by Bridget Welsh. We can appreciate this and other analyses better by looking at all of the data together, something which I’ll begin to do here.

This wouldn’t be possible even ten years ago, but Malaysia’s online media have done a great job of providing data on these elections. I’ve grabbed the data on candidates from the Electoral Commission. Let’s look first at the head-to-head contests: given that these are SMD elections and that both the incumbent BN and opposition PR are contesting in every district (except for one district in which the UMNO candidate didn’t file his papers on time), these will be the matchups that matter.

Looks similar to old patterns, with the Malaysian Chinese Association and (largely Chinese) Gerakan up against the (largely Chinese) DAP and UMNO versus (largely Malay) PAS. However, we see here a real attempt by PKR to continue to break the ethnic politics mold, with significant numbers of PKR candidates against both UMNO and MCA. Let’s see if this holds at the state level:

In short, it does. Now let’s take a look at the parliamentary races in East Malaysia, where the partisanship is so very different.

There are two things to take away from these tables. First is the simple fact that PR is contesting in every constituency, which is a new and striking development. Second is that PKR is really taking it to UMNO, which faces PKR in 13/15 of its races (which are all in Sabah and Labuan). I interpret this as a direct attempt to head off UMNO’s expansion into valuable territory.

So how much do party nominations reflect “their” ethnic constituencies? Recall that most of Malaysia’s parties have clear ethnic bases, and this is especially true among the ruling Barisan Nasional coalition and in the peninsula. I was able to find data on ethnic composition by each electoral constituency from Utusan Malaysia‘s online GE13 portal. Let’s look first at the percentage of each district’s population which is Malay, comparing its distribution across UMNO and other BN parties in the peninsula. First, parliamentary districts, then state assembly districts. 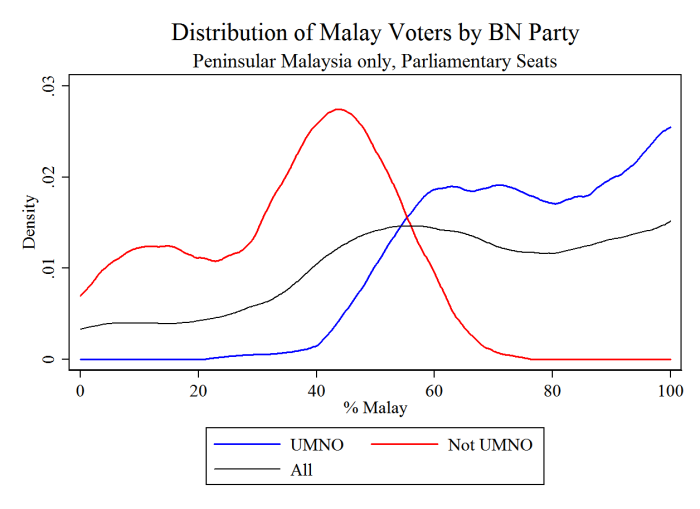 (These are kernel density plots, but they look a bit different than you might expect because the distribution of percentages is bounded on [0,100].) It is abundantly clear here that UMNO gets to represent the Malay majority districts. How does this compare for the three parties in the DR? Let’s repeat the exercise.

These results are also quite clear: PAS tends to get the districts with a big Malay majority, DAP the districts with small Malay minorities, and the PKR tends to occupy the middle range. The only exception is that in state races, there is not as large of a divergence between PKR and PAS at the highest ends of the distribution of Malayness. These seats are still largely contested by PAS, but not exclusively.

The final topic I’ll take on today is the prevalence of third (and fourth, and fifth…) party candidates. These are sometimes independents, sometimes not. Let’s look at how these break down.

These figures indicate that third-party entrants are normal in East Malaysia, and relatively uncommon in the peninsula. We can also detect differences in party competition from non-BN and non-PR parties.

In all, lots to be learned from just the publicly available data, but of course this should all be combined with the excellent contextual analyses being produced by scholars in from Malaysia and analysts in the field. But a couple of strong conclusions emerge: (1) ethnicity matters in both coalitions, (2) regional differences in party competition remain large, and (3) the PR has mounted a unified and truly national campaign, with PKR continuing to try to break down the Law of Party=Ethnicity that has characterized Malaysian politics since independence.