Hoisted from the comments:

The only bone I have is though, is the non-threatening euphemisms that you have chosen – to cover up the rampant racism that are being practised.

What is wrong with calling a spade, a spade?

Why do you have to cover up racism from officialdom with euphemism like “communalism” ?

With the use of ‘communalism’ you are grouping the victims along with the perpetrators – instead of pointing out racism, as it is.

The commenter, “Penang,” wants to know why I don’t talk about racism in Malaysia. When I write or lecture about Malaysia, I often use the terms “race” and “racism,” but I am careful to say that this is the term that Malaysians use, not one that I would prefer to use. I like to talk about ethnic, or better yet, communal issues.

Why? Good question, and although “Penang” seems eager to start a fight with me about it (for some reason that I don’t quite understand), it’s worth a discussion. This is a teachable moment for students of Malaysian politics and Malaysians alike.

One reason why people like me might avoid using the term “racism” in Malaysia is that in general, race as a category for describing variation in human populations does not correspond to any objective physiological reality, which is what the term is meant to do. But while that is true,  I don’t mind using the term “racism” to talk about the United States. So why not Malaysia?

The answer is political. Here is a slide from my Malaysia lectures which makes the point better in images better than I can with words. 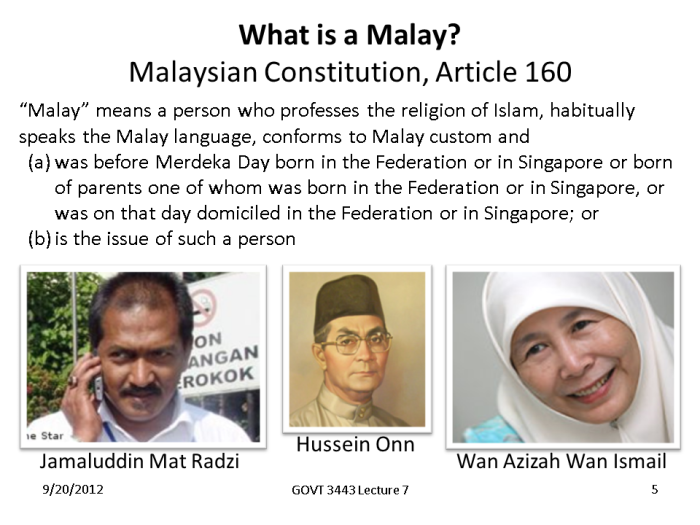 Question: Does race separate Malays from Chinese or Indians?
Answer: no.

This slide is one of my favorites. It shows some examples of the great variation out there in the types of people who count as Malay, and gives us the legal definition for why that is the case. Given the legal definition of what constitutes a Malay, it is simply not true that race is the proper term to describe the differences between Malays and non-Malays (or bumis and non-bumis; don’t get me started about Kristang). This would be true even if race were a useful analytic category. The fact that the phrase masuk Melayu exists—to become Malay, or more literally, to “enter Malayness”—shows you why “race” doesn’t capture the essence of ethnic or communal issues in Malaysia.

It’s possible that “Penang,” like others in Malaysia, uses the term “racism” because it has clearly negative connotations, whereas “communalism” is a more neutral. To this observer, neither is a good thing. And anyway, we shouldn’t choose terms based on how they make us feel, we should use terms that describe society as it is.

The “racialization” of communal differences in Malaysia has a long and interesting history. My interpretation is that the country’s ruling elites long ago settled upon a strategy of divide-and-rule. The principle of division was communal: Malay-Chinese-Indian, later to be modified as bumiputera-Chinese-Indian. But as this lecture slide shows, all of these categories obscure more than they reveal.

As the pressures of modernization and globalization threatened the established identity landscape in Malaysia, fostering new overlapping identities and suggesting that there might be room for a post-communal politics, a language emerged among the regime’s defenders, perhaps not consciously, that racialized communal differences. By racializing, I mean recasting communal differences as fundamental, durable, immutable, and biological. This process obscured the variation within communal groups (and the frankly non-racial definition of Malayness) as a mechanism for cementing the organizing principle for Malaysian politics. After all, if we remember that for many, Malayness was a choice—literally—in the 1950s, then we might not feel so strongly that being Malay or Chinese or Dayak is a big deal, or that we need to things like vote based on our identity. Racializing communal identity is an ideological project that is designed to compel Malaysians to think about themselves in communal terms, because that is what keeps Malaysia’s status quo working.

One final thought, from a more activist perspective. Here’s another way to phrase what I’ve just written. If you think that the differences between Malays and non-Malays are racial, well, then you’re a sucker. You’ve fallen for the politicized communal discourse that generations of Malaysians have been subjected to, a discourse that insists that there are deep, immutable, fundamental, biological differences among Malaysian as a mechanism for justifying the policies that maintain the political status quo.

And since I’m not a sucker, I don’t use “race” to describe communalism in Malaysia.